Union Baptist Church, located north of Decatur Township in the community of Blackfork, was established in 1819. The church, the oldest active black church in Ohio, was recently honored by the state with a historical marker , which will be dedicated at an event on August 27. (The Ironton Tribune | Heath Harrison)

Blackfork Church honored by the State for its history

BLACKFORK — For more than two centuries, Union Baptist Church has served the people of its community, located 27 miles north of Ironton on the edge of Lawrence County, making it the oldest active black church in the country. State of Ohio.

And, in two weeks, a special event will take place to honor its proud history.

A state historical marker will be dedicated at 2 p.m. Aug. 27 at the church.

“It’s happening,” member Lee Keels said of the monument, which is complete and waiting to be installed before the big date.

The history of the church dates back to 1819, just over a decade after the founding of the state.

Those who escaped slavery south to the Free State of Ohio founded Poke Patch in Gallia County, near where it meets Jackson and Lawrence counties. 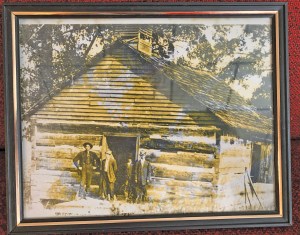 The original log building of the Union Baptist Church was built in 1880. In front are seen Gordon Keels Sr., Nicey Scott, Tom Matthews and Fritz Keels.

In a history of the church, composed for its 200th anniversary in 2019, Poke Patch is described as “a community composed primarily of African Americans, freed or escaped from slavery, free blacks, mulattoes (any mixture of ‘African-Americans with whites, American Indians, European or Asian) and some white families.

“All the work was here at Blackfork and people started to migrate to work,” said member Charlene Jackson, who shared that she’s a direct descendant of the Poke Patch community.

“I think all the people here are descendants of people who worked on the Underground Railroad,” she said. 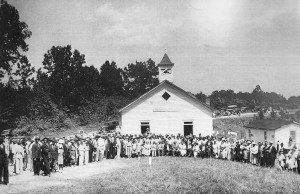 The congregation is seen gathered outside the Union Baptist Church on August 21, 1938.

In 1819 members of the community founded the church, meeting for the first time in members’ homes, with Stewart as its first pastor. In 1879 they began to meet in a building on Dickie Jones’ farm in Peniel.

The story can be seen throughout the church. The steeple contains the bell of the old log church and is still in use to this day, while on the wall is a map of the adjacent cemetery, which is the resting place of generations of families who attended the church.

The members are especially proud of the map, which was a long process and a drone was used to create it. It contains a directory of all known names buried in the field.
Cemetery records had been passed to administrators over the year, but have now been compiled into a comprehensive display, Jackson said. 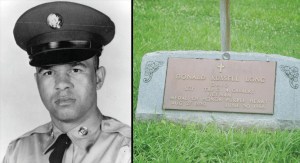 The grave of Medal of Honor recipient Russell Long, a member of the Union Baptist Church, is located in the cemetery adjacent to the building. (The Ironton Tribune | Heath Harrison)

“We have a pretty good idea now,” she said.

One of them is Medal of Honor recipient and church member Donald Russell Long, who received the medal posthumously after the 26-year-old sergeant threw himself on a grenade to protect his crew while assisting in an evacuation during Vietnam. War in 1966. The First Division of the Ironton-Lawrence County Memorial Day Parade is permanently named in his honor. 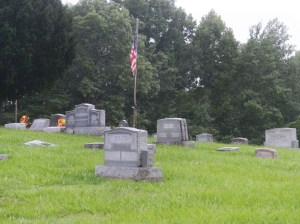 The cemetery next to the Union Baptist Church is made up mostly of congregation members over two centuries old and contains graves of Vietnam Civil War veterans. (The Ironton Tribune | Heath Harrison)

Members say there are about 60 veterans buried in the cemetery, from the Civil War, Spanish-American War, World War I, World War II and the Vietnam War. All are honored by an exhibition in the vestibule of the church.

Reverend Isaiah Tubbs, one of the church’s longest-serving pastors, who led the congregation from 1858 to 1980 and is fondly remembered by members, is also honored in the vestibule. Originally from Alabama, he and his wife, Nancy, came to church from Beulah Baptist Church in Portsmouth and expanded the congregation in Blackfork, while the building was expanded to include a new dining hall, a kitchen and toilets.

Today, the regular congregation has 16 members, who attend every Sunday, although Keels points out they have hundreds of members who have left the area and still support the church financially.

She said they often see large numbers returning for big events, such as the bicentenary two years ago, when more than 100 showed up.

“And we had really good service,” Jackson said.

They said, for the marker dedication, that they already had 80 RSVPs for the event.

“People say how friendly it is and how happy they are when they walk into the church,” Jackson said.

Some members live as far away as California and Hawaii, they said. The oldest female member is Altalena Galliamore-Harris, who turned 100 in June and now lives in Fostoria, while the oldest male member is Herbert Scott, 94, who lives in Texas.

Two of the out-of-town church members started the work to get the historic marker. Sonia Booker of Columbus and Lucretia Scalia of Canton started the process a few years ago.

“They started before COVID,” Keels said.

Booker’s aunt, Glenna Abbott, said her niece submitted the paperwork and worked hard for the marker.

“They were her ancestors and she wanted something done for them,” she said.

The church is currently without a pastor, Keels said, but notes that Deacon Paul Keels has been working to fill the pulpit.

“We belong to a Baptist association with several churches,” she said. “We are not the only ones in the association not to have a pastor, so that keeps him busy. But we are grateful for the ministers who come and they preach from the Scriptures and the Bible and that’s what we were interested in.

She said that’s what all of their regular members are looking for.

“We don’t have a lot of attendees, but I feel like those who attend are concerned about their souls and are here to hear the word of God and the gospel,” she said.

When seven of the members gathered on Wednesday to speak with The Tribune, they showed how important the history of the congregation is, bringing with them written histories of the region and the church, as well as photos. They recalled things they remembered growing up there, remembering barbecue grills and a cement baptismal pool that once stood on the outdoor grounds.

Member Rosetta Keels said for many it was the only church they knew growing up and it is a tradition for them.

“If you were born and raised here, this was the only church you went to,” she said.

Lee Keels said the appeal is that “Everyone is like family”.

“We are famous for our prayer chain,” she said, as an example. “When a person is sick and needs prayer, they connect to the prayer channel. They are all family.

Jackson said the call is also “the fellowship of being with so many people that you’ve known for years.”

For members past and present, she said it’s still a home.

“That’s why everyone far from here, when they say home, they mean here.”