(RNS) — As a black, bisexual, non-religious person, Rogiérs Fibby is all too familiar with the subtle navigations required of their different identities in professional and personal spaces.

“It’s sort of programmed. I make these adjustments and edit myself in these ways that take effort and it takes energy from my heart,” said Fibby, 44, who was raised in Moravia and is the director of Black Noncrossing of DC. .

Singer and producer, Fibby has found himself negotiating his identities, sometimes with people who may be homophobic or racist, but also with those who, while being pro-LGBTQ or supporting Black Lives Matter, are uncomfortable with his lack of religion.

“There are times when I’m very confident and bold in asserting myself in these spaces,” said Fibby, who identifies as an atheist and agnostic. “Then there are other times when I have to make judgments and calculations that are essentially repressive. I find myself hiding and holding myself back.

Sometimes he wonders, “What could you have done with that energy if you hadn’t had to deal with those kinds of responses?”

A survey of non-religious people reveals that LGBTQ people routinely hid their non-religious beliefs and are more likely than their non-LGBTQ peers to face stigma and discrimination in almost every aspect of their lives – education, employment, mental health services and within their families – because of their beliefs.

The report, “Nonreligious Lesbian, Gay, Bisexual, Transgender, and Queer People in America,” released Tuesday, August 16, details the extent to which non-religious LGBTQ people experience both religious oppression and anti-LGBTQ sentiment as well than the level of depression in people raised in religious homes.

The research, based on a survey of nearly 34,000 non-religious people in the United States, found that LGBTQ participants were about 16.1% more likely than non-LGBTQ respondents to mostly or always hide their non-religious identity from their family of origin.

Of those who are non-religious and LGBTQ, a quarter said they always hide their non-religious beliefs (25%) from strangers, within extended family (24%) and at school (23%). About 1 in 5 said they do so at work (21%). 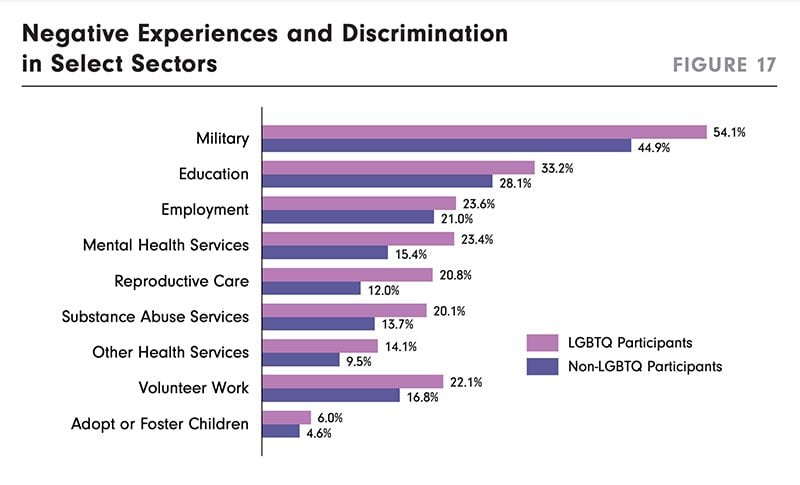 The report also highlighted that nearly 9 out of 10 LGBTQ participants from very strict religious families had negative experiences with their families because of their non-religious beliefs.

“Family rejection had a significant negative impact on the psychological well-being of LGBTQ and other participants,” according to the report.

“This report was really about looking at who we are, as a double minority, as a group that is often targeted for being LGBTQ, but also for having religious beliefs imposed on us and feeling the stigma and discrimination for being non-religious” , said Tom Van Denburgh. , spokesperson for American atheists.

“Our very existence, being both LGBTQ and non-religious, often challenges and perhaps even negates the possibility that we live in a conservative Christian nation,” Van Denburgh added. “That’s problematic for a lot of religious conservatives.”

RELATED: Study: Women with No Religion Experience Discrimination — When Seen at All 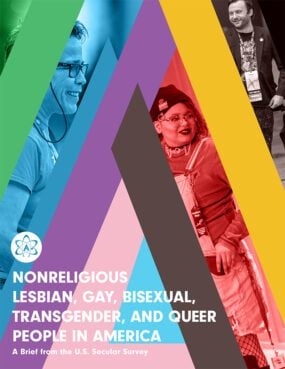 The report notes a dwindling number of LGBTQ people who identify with religion, given religious efforts intended to “stifle LGBTQ equality”, such as opposition to legal same-sex marriage, support for legislation targeting young trans people and the reluctance of many religious groups to marry. or ordain LGBTQ people.

“Some find refuge in secular communities, which overall are among the most LGBTQ-accepting religious demographics,” the report said.

The report references data from 2018 showing that atheists are the religious demographic with the highest percentage of LGBTQ members. Additionally, 92% of atheists support same-sex marriage, according to the Pew Research Center.

Nearly 23% of people who took part in the 2019 US secular survey, which is the basis of the report, were non-religious LGBTQ adults.

Among non-religious LGBTQ people surveyed, more than half (54%) identified primarily as atheists. Most were white (92%), half were female (50%), 42% identifying as male, and 16% as trans or gender non-conforming. About half said they were bisexual (49%). Nearly 60% were brought up in a Protestant household. 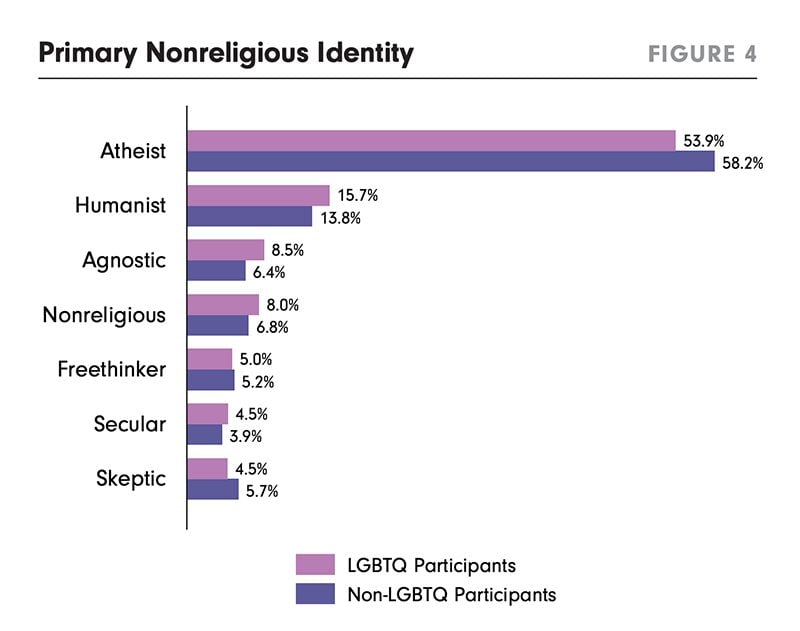 For Killian Bowen, who grew up in a Pentecostal family, discovering atheism as a teenager was “the way I escaped the situation around me”. Bowen said he knew he was queer when he was 8 years old.

Bowen identifies as an atheist and works as Assistant State Director of American Atheists for Morehead, Kentucky.

“Part of the reason I became an atheist was that I felt tremendous shame for being in the religion I was in. Atheism helps me justify my identity,” Bowen said.

With this new report, Bowen said he hoped “more people could recognize the fact that there is religious discrimination in all aspects of our lives, especially in the South.”